Last week Jason and I went to London for our wedding anniversary (we celebrated a little early because of a packed schedule over the next few months). London was fabulous! We are both soccer fans, but Jason is a huge soccer fan. So, for a soccer fan, London is pretty dreamy! We had the awesome opportunity to go to two English Premier League games (Reading vs. Liverpool…Liverpool is Jason’s favorite team! And, the FA Cup Semi-Final game between Manchester City and Chelsea). Both were such fun experiences! The rest of the time in London we went sight-seeing and just enjoyed exploring the city! We felt really thankful that we had the opportunity to spend such a lovely couple of days together, in such a fabulous city, to celebrate our anniversary.

We spent the bulk of Sunday exploring London and walking all over! Any time that we travel we try to see as much of the city as we can, and always end up walking…A LOT. We also try to make sure to stop and grab a drink, or stop for some coffee and mid-day treat. On Sunday we came across a beautiful Laduree store. I was in heaven! I absolutely love macaroons, paired with a delicious latte…fantastic! 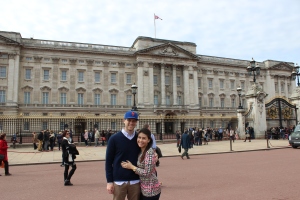 While we asked Kate and William to meet up for coffee, they apparently had more important plans to attend to. So, we settled for a picture in front of Buckingham Palace

Some of the beautiful, quaint settings that we came across in the city. 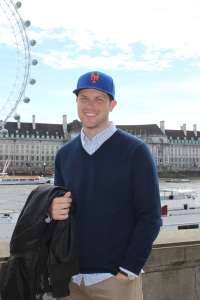 My dreamy hubby….so in love with him! 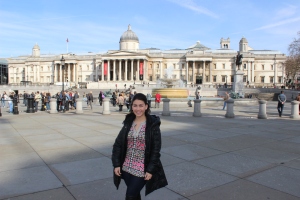 How gorgeous is this Laduree!??!!